A successful insurance company must be able to consistently detect fraud. Lemonade is developing superior fraud detection through (1) data integration within the company, (2) a fully digital claims process, and (3) AI machine learning. Lemonade's AI Jim can automatically detect much fraud without human involvement and can flag difficult cases for further human inspection. 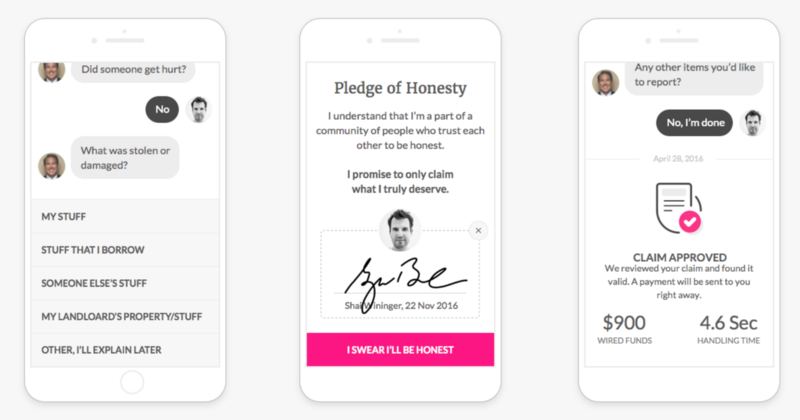 Fundamental to the success of any insurance company is its ability to identify fraud in the claims process. Fraud can include inflating or exaggerating claims, submitting claims for damages that never occurred, and staging accidents or theft. If an insurance company is being defrauded far too often, it will fail.

The FBI estimates that $40 billion in insurance fraud is committed every year (excluding health insurance fraud). This means insurance fraud costs the average American family between $400 and $700 per year in the form of increased premiums (see further detailed discussion of fraud from the Insurance Information Institute).

Fraud is a difficult problem for traditional insurance companies to solve, mostly due to lack of good data gathering and the use of human agents to collect information, who have varying abilities to spot fraud. So, often the solution is simply to admit the reality of fraud and increase premiums to make up for the inevitable losses.

What can insurance companies do to better detect fraud?

To become better at detecting fraud, a company needs . . .

1. Data Integration within the Company: The stolen scuba gear story

In a previous post, we discussed how Lemonade’s internal workflow manager AI Cooper was able to integrate data from its customer service department and claims department, in order to spot potential fraud.

A potential customer contacted Lemonade to see if stolen scuba gear in his car outside his apartment would be covered and he was told yes. He proceeded to sign-up and two weeks later, Lemonade’s claims department received a claim for stolen scuba gear -- which AI Cooper flagged as potential fraud, based on data from the customer service department.

Departments within traditional companies are siloed off from each other and the connection probably would have been missed. But Lemonade’s AI Cooper integrated data between departments to spot potential fraud.

A company needs to build a full-orbed profile of its customers based on every single interaction with the company, not just during the claims process.

This sort of comprehensive profile is only possible if every interaction with the company is tracked, from sign-up to small changes to policies to complaints to past claims and more. All of this data on a single customer must be stored in a place that every department in a company can access. And all of this data is overwhelming for a human to process and make sense of, but AI gets smarter as the amount of data increases. With all such data, AI is able to better understand and serve the individual customer, as well as better evaluate the customer for potential fraud.

A fully digital claims process is the most important need for superior fraud detection.

Both the amount and quality of the data gathered with these methods are sub-par. And metadata such as the person’s location, time, how long it took to fill out the entire form and its individual parts, non-verbal cues such as tone of voice, facial expressions, hesitation, looking away, or perspiration -- all these important data points are usually not captured with traditional data gathering methods.

2.2 What fully digital claims can capture

Lemonade uses a fully digital claims process that captures a large amount of high-quality data. Customers submit claims by recording a video that explains what happened. Lemonade’s AI analyzes these videos for signs of fraud, then makes a decision to either pay the claim immediately or push the claim to a human agent for further inspection. This method of handling claims is both efficient for the customer (fast payouts) and protective for the company (flagging suspicious claims).

Most importantly, all the metadata easily missed by human agents are captured. And the claims video can be re-played over and over for human agents to inspect carefully, unlike traditional claims filled out online, made over the phone, or made in-person (assuming the meeting wasn't video recorded).

Lemonade’s fully digital claims process helped them catch a quite hilarious case of fraud. In 2017, a man filed a claim for a stolen camera and other electronics, which was quickly paid out for $677. Lemonade erred on the side of trust and customer delight, even though later Lemonade would discover that this claim was fraudulent.

Later that year, the same man filed a claim for a $5,000 stolen camera, but wore a wig and lipstick with a different account, fake name, fake email address, and fake phone number. AI Jim denied the claim and flagged the user.

Not to be deterred, the same man filed a third claim with another fake account and was wearing a pink dress this time. AI Jim flagged the case for Lemonade’s special investigations, who transferred the case to the authorities. This story was even picked up by Forbes magazine.

‍
A case like this may have been caught by human agents at a traditional insurance company, but it would have taken more time and effort than AI Jim, who cracked this case without human involvement. A fully digital claims process powered by AI saves time and money and can be more successful at catching fraud than human efforts.

The benefits of a fully digital claims process powered by AI are two-fold: (1) for customers, claims can be paid fast, often in a matter of seconds; (2) for the company, many claims can be handled automatically without a human agent needed, except with difficult cases needing human follow up.

Even if insurance companies are successful in catching cases of fraud, companies have to repeat this process many times over and be consistently successful.

With traditional insurance companies, the data identifying past fraudulent claims are generally not fed into a system that gets smarter and better at handling future claims.

The exception would be insurance agents who have been working in claims for many decades and who have become very good at detecting fraud. But such experience is very hard to acquire and even more difficult to pass on to other agents.

Machine learning trains Lemonade’s AI Jim to learn from past experience, so that AI Jim gets smarter and smarter, and better and better at catching fraud in future claims. And AI Jim does this automatically without human involvement and his knowledge is not stored in the minds of a few veteran insurance agents, but in the AI behind Lemonade’s entire claims process.

Our claims bot, AI Jim, is getting smarter and faster by the minute. He handles claims all day long, and approves many in just 3 seconds. Here’s what he’s learned along the way 👇 (1/8)

But first: Why’d we create AI Jim? One of the most painful parts of insurance is filing a claim—it involves too much time, hassle, & paperwork

We powered AI Jim to handle claims instantly, building algorithms that understand the nature of claims, their severity, & context (2/8)

AI Jim rose to fame quickly, setting a world record. In just 3 seconds, he reviewed a claim for a stolen Canada Goose, cross-referenced it against the user’s policy, ran 18 anti-fraud algorithms, approved it, sent wiring instructions to the bank, & delivered the good news (3/8)

Now that happens 24/7. As he handles claims 'round the clock, he gets more agile & impactful. He was promoted to Senior AI Claims Manager, and started controlling claims inflow, instantly assigning claims to our human Claims Experience team based on expertise & availability (4/8)

He also learned to introduce our claimants to their Lemonade claims advocates, so they can start working on their case quicker. AI Jim is an exoskeleton, an Iron Man suit of sorts, cloaking our people in superhuman powers (5/8)

Plus, AI Jim mastered helping Lemonaders through catastrophes. If a user files a claim in an area with a hurricane, flood, or wildfire, he takes them through a special, quick flow addressing the emergency, so they can spend less time filing a claim in their hour of need (6/8)

AI Jim is getting better at catching fraudsters, thanks to big data & AI. He's caught several, including a user who filed 3 claims under different names, phone #'s, and disguises. He flagged this to our investigations unit, who sent the case to authorities (7/8) pic.twitter.com/doWZXkRRS1

Most recently, AI Jim learned how to handle pet insurance claims, & now approves many claims in just 1 second. As he continues helping Lemonaders in their hour of need, he’ll grow smarter & faster, freeing up humans on our CLX team to help our users when they need them most (8/8) pic.twitter.com/kbOVOt06uI