The Clean Energy Act for America would have a positive impact on Tesla by making most Tesla cars eligible for a $10,000 refundable tax credit and handicapping Chinese EVs from entering the US market. However, Tesla does not employ unionized labor, so Tesla would be ineligible for an additional $2,500 credit that companies such as Ford and GM would gain. 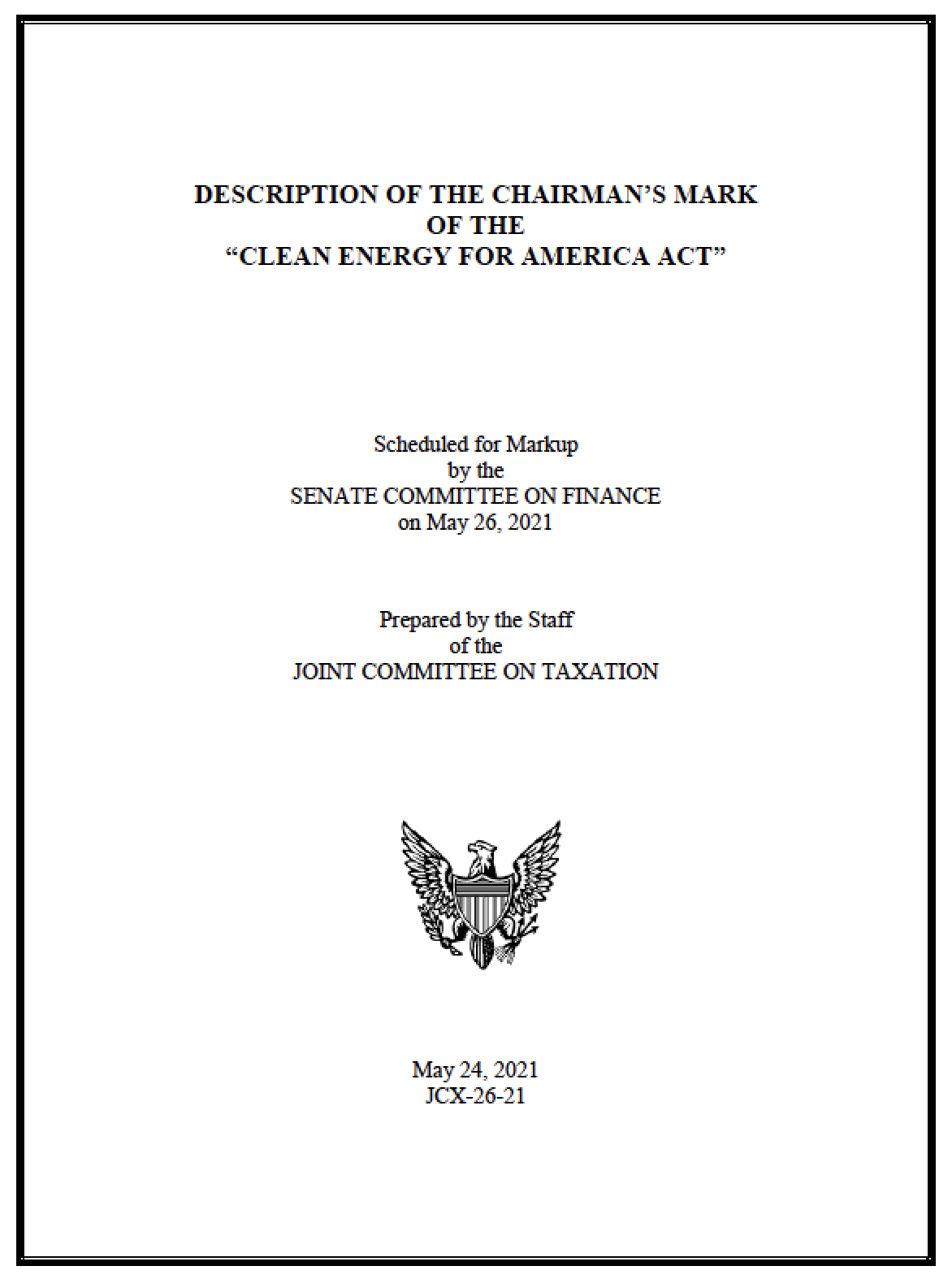 Update August 2, 2021: The US Senate passed a 2,700 page, $1 trillion bipartisan infrastructure bill that would provide $7.5 billion for building new EV charging stations. However, the bill makes no mention of EV tax credits, so we must wait and see if the Senate will pass the May 2021 draft of the Clean Energy for America Act (discussed in this article). Or, the Senate may draft a separate spending bill later this year that would include EV tax credits.

On May 27, 2021, a draft of the Clean Energy for America Act that was introduced by Democratic Senator Ron Wyden moved out of the Senate Finance Committee. It modifies 26 U.S. Code § 30D - New qualified plug-in electric drive motor vehicles.

‍As of now, only GM and Tesla have reached 200,000 EVs produced. GM and Tesla were thus no longer eligible for the EV tax credit, so both companies stand to benefit.

2. Phase-out of the credit begins when EVs* account for more than 50% of annual sales of all new cars in the entire United States.

For perspective, in 2020, only 1.8% of new cars sold in the US were EVs. It could take 10-20+ years for EVs to reach 50% of all new car sales in the United States. President Biden has set a goal to reduce greenhouse gas emissions by 50% by 2030, so a nine-year time frame is an aggressive goal that this law would help.

3. The phase-out of the tax credit takes three years.

Previously, the credit was non-refundable, meaning that a taxpayer could not claim the full credit if their tax bill did not equal or exceed the worth of the credit (up to $7,500). For perspective, in the IRS 2020 tax table, a person would have had to have the following taxable income to pay $7,500 or more in taxes:

In other words, those with taxable incomes below the amounts listed above did not receive the full EV tax credit under previous law. However, under the new bill, the EV credit would become fully refundable, regardless of income level.

There are two measures to deal with fraud: (1) taxpayers must provide the vehicle identification number (VIN) on their tax returns. (2) The IRS is given “mathematical error authority” over taxpayers who omit their VIN.

Senator Chuck Grassley introduced an amendment (p. 48) with additional measures to deal with fraud. The seller must report the following information to the IRS: (1) the purchaser’s name and Taxpayer Identification Number (TIN, usually social security number). (2) The VIN of the electric vehicle. (3) Verification that the car was purchased, not leased. (4) Verification that the car is new, not used. (5) The battery capacity of the vehicle. (6) A summary of the maximum credit the purchaser is eligible to claim. However, Grassley’s amendment was rejected.

6. Two additional credits worth up to $5,000 for EVs assembled in the US by unionized labor.

Democratic Senator of Michigan, Debbie Stabenow, introduced an amendment (p. 3) to provide two additional credits worth up to $5,000: (1) $2,500 for “qualifying vehicles, the final assembly of which is in the United States,” and (2) another $2,500 for “qualified vehicles assembled at facilities whose production workers are unionized.”

The maximum credit is therefore $12,500 if the EV’s final assembly was in the United States and was assembled by unionized labor.

8. The Manufacturer’s Suggested Retail Price (MSRP) of the EV must be $80,000 or less in order to qualify for the credit.

This is to prevent high-earners purchasing luxury cars from benefiting and to encourage manufacturers to build cheaper EVs.

9. Chinese made EVs would be ineligible for the tax credit.

‍Senator John Cornyn, the Republican Senator from Texas, introduced an amendment (p. 55) that excluded Chinese produced EVs from the tax credit. In a rare move of bipartisanship, this amendment was passed unanimously.‍

This is the standard credit of $7,500. Any of the enhanced credits for cars assembled in the United States and/or assembled by union labor would not take effect until 2022.

‍This credit includes both the $7,500 main credit plus another $2,500 for Tesla cars whose final assembly was in the United States.

Tesla cars would not be eligible for an additional $2,500 credit because Tesla employees are not unionized.

We do not know how final assembly will be tracked, but as of Q1 2021, Tesla cars are manufactured at the following factories:

If someone waits until 2022 to buy a new Tesla, they would eligible for the additional $2,500 credit. This could have a negative effect upon Tesla in 2021 by causing some people to delay their purchase until 2022.

4. A fully loaded Model S, the Model S Plaid, and the Model X would not be eligible for the tax credit.

‍Since a qualifying EV cannot sell for more than $80,000, a fully loaded Model S, the Model S Plaid, and the Model X would be excluded. But all other Tesla cars (Model 3, Model Y, Cybertruck, base version of the Model S) would still be eligible for the tax credit.

Under the old law, Ford could entice buyers with a $7,500 tax credit that the Tesla Cybertruck did not qualify for. However, if this bill passes, the Ford F-150 Lightning would be eligible for a $12,500 credit since Ford uses unionized labor and the F-150 Lightning will be manufactured in Michigan. The Tesla Cybertruck would qualify for a $10,000 credit since it will be manufactured in Texas, but Tesla does not use unionized labor. Under the old law, the Tesla Cybertruck does not qualify for a tax credit at all. Thus, the tax credit difference under the new law would be $2,500, instead of $7,500. This is a net win for Tesla.

‍6. The exclusion of Chinese-made EVs from the tax credit is a blow to Chinese EV companies such as NIO and Xpeng.

Summary: The Clean Energy Act for America would have a positive impact on Tesla by making most Tesla cars eligible for a $10,000 refundable tax credit and handicapping Chinese EVs from entering the US market. However, Tesla does not employ unionized labor, so Tesla would be ineligible for an additional $2,500 credit that companies such as Ford and GM would gain.